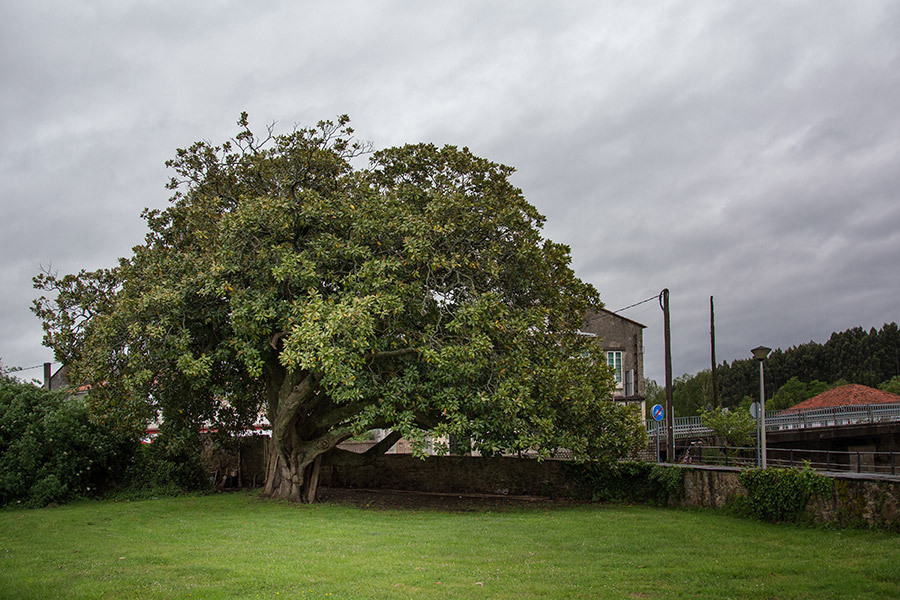 Before leaving the territory of Narón and alongside Xuvia Bridge, the pilgrim leaves behind him on his left one of the most unique trees in the borough of Ferrol. Popularly known as the Magnolia of the Queen. It is at the side of the road, near the bridge and opposite the last house in this nucleus. It is an example dating back a hundred years and some people say it is more than one hundred years old, others more than three hundred and it is endowed with large dimensions. Word of mouth has it that it derives from the Philippine islands and was brought by some local sailor.

Magnolia are trees which are found in many gardens because their flowers are very attractive and fragrant.

On the other side of the road there is a small square with a fountain. From here there is Access to a promenade alongside the right bank of the River Xuvia, a promenade flanked by magnolia, though younger than the Magnolia of the Queen. This promenade starts alongside the mil building, known as the Xuvia Mill or Royal Flour Factory, endowed with large dimensions and built in 1775 by a company with two French partners; it had four grindstones. It was also a paper and fabrics factory.

Going back onto the road the pilgrim must cross the Xuvia bridge to cross the way. This bridge is of medieval origin and it is thought that the original construction was made of wood. The present image can be put down to the remodelling work carried out in 1831.